We know this for a long time. They deceive us about the extent of our vision which is limited to a narrow band of the spectrum of electromagnetic radiation. They are able to see "colors" where there are not (they are only frequencies) and are unable to discern small color differences, are subject to illusion, to retinal persistence, various diseases or abnormalities (as color blindness) that can further reduce their effectiveness (already limited) are even unable to distinguish between colors in low light, have a field of sharpness actually quite narrow, and so on ...
With their physical limitations and their propensity to be misled they are very few credible and therefore unreliable ! So we can logically say that the image view is absolutely not the Reality (with a big R) but merely a vague subjective interpretation thereof.


But let us postulate that our vision is just so that the image view is "true".
What is happening in the photograph?

The photographic image is flat, which is the first big difference and a reduction of the visual "reality". In addition, this image is from the onset subject to various other "changes": those due to the materials used and those attributable to the choice of the photographer.

The emulsion (or digital sensor) and the lens inevitably introduce some defects that may already be likened to "unintended interpretations" :

For the photographer the choice of the focal length, of the angle of view, of the depth of field, of the area development, of framing, his willingness to give an impression of movement (motion blur) are already an interpretation of the "reality" ... a personal, subjective and deliberate point of view before shooting. What about the "aesthetical" choices in the picture rendering that requires simple and special settings in the camera firmware before every shot (not to mention real "manipulation" of the image that will occur later and this time consciously under the enlarger or computer) ?

It is therefore clear that, upon obtaining the photographic image (or even before), we are far from the objectivity that we believe. So we can conclude that photos are ultimately an illusion of reality.

In pursuing this simple argument a question arises: "So, why is it necessary to stop the process now ?"
If one accepts to recognize that the image is already and originally "distorted"  so why do not chose to work knowingly and enjoying to turn this lack of veracity in a more creative work ?

To read or listen (in french) :

Photo of the month 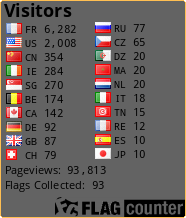